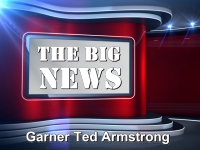 The big news seems to go unnoticed, while our attention is swept this way and that by the Liberal news, the local news, the latest sports scores, the political squabbles, the dock strike, the joblessness, the latest flood, a tornado, maybe the National News, but what does it all mean? The big news is the news that was brought to this earth nearly two thousand years ago, about a way to world peace. The really big news is a solution to the… …