Who Will Save You? – Garner Ted Armstrong – Good News Magazine

Who Will Save You? – Garner Ted Armstrong – Good News Magazine 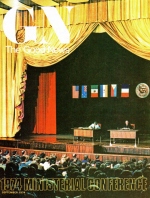 By the time a potential suicide is headed for the bridge, or finishing his final note and turning on the gas jet, he’s beyond looking in the yellow pages for a psychologist. By the time the screaming match ends in physical injury or death, it’s too late to call a professional marriage counselor. When the teen-ager is already halfway to the anywhere destination, running away from home, it’s a little late to seek help in how to rear children. Most of us seek help inside ourselves, or from close friends who will commiserate. Trouble is, if the answer were inside us, or even to be found in the minds of our closest friends, the chances are we wouldn’t have the problem! …