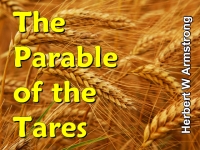 Now, “Another parable he set before them, saying, The kingdom of heaven is likened unto a man that sowed good seed in his field: but while men slept, his enemy came and sowed tares also among the wheat, and went away.” Now, here again it is the Kingdom and it’s the Kingdom of God. Is He talking, my friends, about this present time? Now, people have tried to think, they have supposed that Jesus spoke in parables to make the meaning more clear. They have supposed that this is the only time of salvation and that pretty soon it’ll be too late. God has been making a desperate effort to get the world saved. …