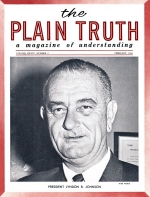 Khrushchev has just issued a letter to world leaders. He proposes a pact in which all states renounce force in settling territorial disputes. Here’s why it will not work – and what the Bible says will bring us peace at last! Why does the threat of world annihilation hover ominously over all the nations today? Why do millions fear that World War III might suddenly be unleashed upon an unsuspecting world? Simply because there is no SUPREME AUTHORITY to Stop it! A holocaust could be triggered through a mechanical or electronic defect, through human carelessness or miscalculation, or through the irrational acts of a madman at the helm of any nation possessing nuclear weapons! No man – devised world government could prevent it. …