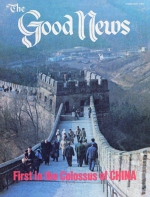 About the time of Adam’s death, the earth was experiencing a great population explosion. With life spans of eight hundred and nine hundred years, people could produce dozens of children during a normal lifetime of marriage. The natural death rate was low as well. Adam’s was the first recorded natural death, and that was 930 years after creation. Anyone who can do simple multiplication will conclude that there could easily have been more than a billion people inhabiting the earth within the first thousand years. There were probably more. But now the sad part. Wickedness was multiplying just as fast as the population. Most everyone had rejected the commandments of the true God and disregarded any code of moral conduct. …