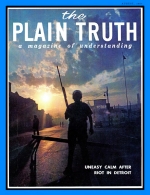 Instability is the hallmark of our times! The spectacle of dignified government leaders engaging in screaming harangues; senators, congressmen losing their tempers – the constant reports of riotous mobs raging at police – these and other violent outbursts of rampant human passion fill your newspapers. Here’s WHY such unbridled emotion, and what YOU ought to do about it. “But – What caused it?” ask bewildered citizens in the wake of another violent riot. Officials demand an investigation. Police issue official statements about the “cause” – usually that of police action in attempting to arrest a criminal, and the riotous attempt of a mob to prevent it. But isn’t the question a little silly, after all? The true CAUSE of riots is HUMAN NATURE. Vanity-filled, jealous, lustful, greedy, resentful, rebellious, hateful, riotous HUMAN NATURE! …