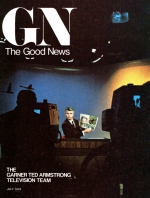 DID YOU ever attempt to relate some information to a lawyer, an agent for the Federal Bureau of Investigation, or an insurance investigator? Did you become irritated when every time you told a crucial part of the story he continuously interrupted and asked, “Now, how do you know that? Did you actually see that happen? Do you know that for a fact or did someone tell you?” It would seem that he was forever interrupting and never willing just to accept your statement of the way things happened. He insisted on getting to the ultimate source of the information. He only wanted the firsthand facts and was never willing to accept your assumptions. …