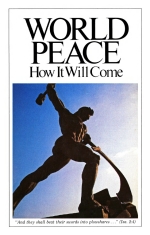 I travel to all parts of the world as an ambassador (without political portfolio) for world peace. I discuss world problems, evils and world peace with many heads of governments — kings, presidents, prime ministers, and those high in the government, leaders in science, education, commerce and industry. I have not been called, and therefore make no effort, to bring about world peace — but serve as an ambassador of the power that will bring it in our time! MOST WORLD leaders are of superior ability. Yet they are utterly unable to abolish world evils or bring about world peace. …