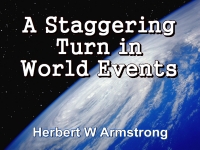 Ladies and gentlemen greetings, if you knew what is prophesied to happen to the United States and that means to you and to yours within the very next few years you would be very vitally concerned. A staggering turn in world events is prophesied to happen in very next few years. If it doesn’t happen in this decade it is almost certain to happen in the following decade, it’s going to happen in your life time and very very soon. It will violently involve the United States, Britain, Europe the Middle East and to a less extent the entire world is going to be erupted in violence …