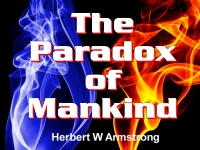 The next issue of the Plain Truth Magazine will contain on the cover a picture of the doomsday Clock of the Atomic Scientists showing that the Atomic Scientists have already turned that clock from four up to three minutes before midnight and all systems are go and counting. We are that near to what they call the end of this world. You know Jesus Christ was asked about the end of the world and he gave a prophecy about it and he said that this gospel of the Kingdom, which is being proclaimed for the first time in nineteen hundred and fifty years on this program and has been proclaimed on this program for the last 50 years, when it is proclaimed then that is the sign of the end of the world that it is very very near and then Jesus Christ went on to say, a time of trouble such as has never happen in all the history of the world up to this time and never will again, just before the end of the world and the second coming of Jesus Christ in all power and glory to rule all nations and to bring us world peace at last, peace and happiness and joy and salvation for all who are willing. …