How do you HATE SIN? – Leon Walker – Good News Magazine

How do you HATE SIN? – Leon Walker – Good News Magazine 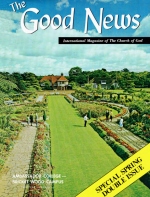 Do you minimize sin? Do you justify the wrong you do by comparing your sins to someone else’s? What attitude should we have toward sin? As the Days of Unleavened Bread approach, we need to seriously review these questions. “YES, I realize Johnny lied, and I know he shouldn’t have done it,” said Mom. “But, after all, it isn’t as though he had murdered someone.” Johnny told Mom he had no homework. Certainly it was just a “small” lie. Nothing like murder or theft. Nothing to get worked up about, she thought. …