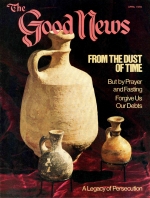 We learned from the article last month on the background of the parables of Jesus, what parables are and why Jesus used them. We also saw that there are three distinct sets or groupings of parables, each having a different theme. In this article we begin to examine the first six parables of the first group. As Jesus sat in a small fishing craft just offshore on the Sea (or lake) of Galilee, He began to address the large crowd assembled on the shore. He spoke in parables about the Kingdom of God. …