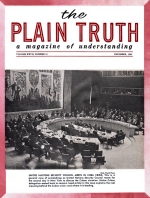 The resurrection of Christ was NOT on Sunday morning. Yet today it is almost a universal custom among professing Christians to celebrate Sunday as the “Lord’s Day.” WHY? The incredible TRUTH about the origin of Sunday observance is published for the first time in The PLAIN TRUTH. BELIEVE, it or not, Sunday was celebrated by pagan s as the “Lord’s Day” over 2000 years before the resurrection of Christ! It was on Sunday that the worshippers of BAAL met every week. How did this heathen practice invade the Christian Church? It is time we peer behind the curtain for the facts! It is time we understand HOW, WHEN and WHERE Sunday observance originated. The facts of history will shock you! …