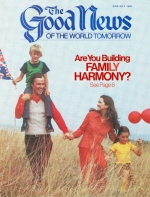 Here is an important key that can promote your spiritual well-being. What are your first thoughts when you meet someone for the first time? How do you react? What impresses you most? His looks? His voice? The way he is dressed? What if you already know the person? What is the first thing that crosses your mind when you see him? His faults? A misunderstanding you might have had with him? Perhaps a wrong he has done you? Do you usually have nice thoughts upon meeting a person, whether an old acquaintance or a stranger? Be honest. Take time and think before you answer. …