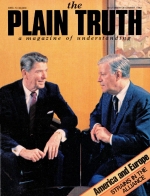 Aggressive nations, not weapons, make wars,” British Prime Minister Margaret Tatcher told a UN Special Session on Disarmament shortly after Britain’s triumph in the Falkland Islands. It is “an evasion of responsibility to suppose that · we can prevent the horrors of war by focusing on its instruments,” she said. “These are more often symptoms than causes. Wars are caused not by armaments but by the ambition of aggressors.” In another speech before the same session, U.S. President Ronald Reagan said, “The Bible tells us there will be a time for peace. But, so far this century, mankind has failed to find it.” He told the delegates that more than a hundred armed conflicts have “disturbed the peace among nations since World War II and today the threat of nuclear disaster hangs over the lives of all our people.” …