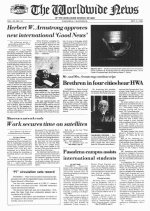 One of the biggest success factors that — as the old saying goes separates the sheep from the goats is endurance, Endurance! It means to hold on. To last. To remain. To continue. Endurance is the ability to put up with pain. To persist under pressure. To deal with distress and fight fatigue. Stop and think about this character trait for a moment. As Christians we must develop it. Our eternal life depends on it. Matthew 24:13 says, “He that shall endure until the end, the same shall be saved.” …