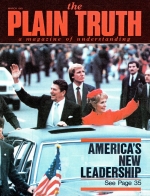 The push to eliminate all sexual distinctions in society IS now challenging God and the Bible. SUPPOSE YOU were to open your Bible tomorrow and read: “Our Householder; Which art in heaven; Hallowed be Thy name; Thy rulership come … ” What would you think? Yet this is how what is commonly and erroneously called the “Lord’s Prayer” would begin if an increasingly vocal movement were to have its way. Or how about beginning with “Our Sustainer,” “Our Person,” “Our Parent,” or “Our Mother/Father, which art in heaven”? Actually, even the term “Lord’s Prayer” would have to be changed to “Ruler’s Prayer” or “Governor’s Prayer” or something similar, since the word Lord is masculine and therefore – we are told – sexist. …