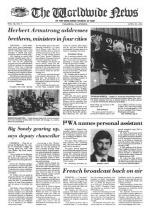 In a newspaper column I was reading the other day, a reader was commenting on a letter she had seen in the same column a couple of years previously. In the letter, a woman was lamenting that her mother had been in a nursing home in another part of the country, and she really had been negligent in writing and visiting her. Then, after her mother’s death, she wrote about how remorseful she was because of her neglect. …