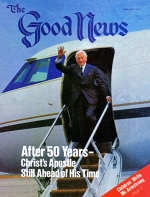 No news story could be more shocking. No newspaper headline could be more spectacular than: “JESUS CHRIST RETURNS!” Yet, just before His death and resurrection – before His departure from the Mount of Olives to go to heaven more than 1,900 years ago – Jesus Christ promised, “I will come again” (John 14:3). And only moments after His ascension, the apostles were startled by the appearance of two divine messengers who assured them, “This same Jesus, which is taken up from you into heaven, shall so come in like manner as ye have seen him go into heaven” (Acts 1:11). …