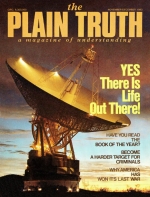 Millions are being spent in an attempt to contact other life in the universe. What will be found? We look up into a black sky, dotted with millions of stars, and we wonder – is there life out there? Are there other creatures similar to life on earth? Are there life forms totally different from ours? Or is there no life at all in outer space? Is planet Earth unique? These questions have puzzled mankind for centuries. Even modern men are bewildered about mysterious places such as Nazca in Peru and the Bermuda Triangle. Science fiction writers have capitalized on our natural curiosity and have produced hundreds of books, magazine articles and movies on the subject of life in the universe. …