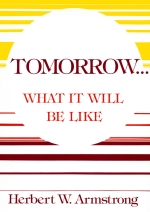 DOOMSAYER preachers intone it; TV commentators broadcast it: newspaper headlines emblazon it. The evidence seems all too persuasive – pollution, sexual excesses, wanton violence, continuous wars between nations, would indicate that the human race is skidding into its self-made vat of destruction. And, even if the general public could somehow be persuaded to resist immorality in order to save itself, then we face the arrogance of international powers, awesome in their capacity to destroy: one madman need only press the nuclear button and incinerate the earth. So overwhelming and persistent is this gloomy thesis, that one might see little room for optimism. But a resounding force – the voice of Herbert W. Armstrong – consistently inveighs against the cliché. Stalwartly, in his broadcasts and in The Plain Truth magazine, the vigorous Pastor General of the Worldwide Church of God points the way to a better tomorrow – comprehensive and available to all who would seek it via truth and sincerity. …