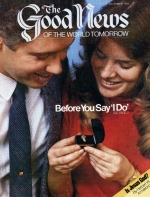 Your child’s future success depends on how well you prepare him or her before formal education begins. you know, Honey, Bobby will be starting to school next week,” said the young mother to her husband. “Shouldn’t we be getting him ready? Is there anything that he should know?” “No, we’ll only confuse him. Better let his teacher do it,” her husband shrugged. Jenny’s parents had a completely different approach. Teaching their daughter to read was all important to them. Even before she was age 2 Jenny began to read. Now she was reading near a fourthgrade level. “She’ll have no trouble at school,” boasted her parents. …