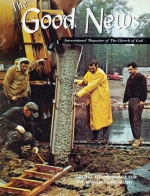 You are in a war! Your eternal life depends on the outcome! Read in this article what and how to fight. EVERYBODY likes a fight. No one knows this better than movie producers. That’s why nearly every western, spy thriller, or even comedy situation has its fight scene. In many cases the picture builds up dramatically to the big fight – the all-out fist fight – where tables, chairs, windows, posts, bottles and nearly every other thing in sight is smashed to pieces. People love it. But most don’t know why. Children love fights. Witness their fighting nature on any playground or school yard. …