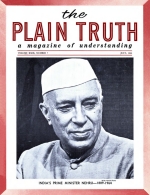 Agnostics allow Jesus to be, at most, a human philosopher. Atheists insist He never lived! Modernist theologians are still searching for “the historical Jesus”! Can it be proved that Jesus Christ lived? Most people take the existence of Jesus of Nazareth for granted. They have never stopped to prove whether the New Testament gospel records of Jesus are really true! Recently I received a vehement letter from a presumed skeptic. He did not like what I wrote about Jesus and the twelve apostles in the May PLAIN TRUTH. His challenge deserves a public answer. Here is his letter. “After reading your effusion ‘Where Did The Twelve Apostles Go?’ I feel it would be wrong to let it pass unchallenged even though this letter will be like a cry at the North Pole. But at least you will know nor all your readers are illiterates who swallow the mystical nonsense that clutters the pages of The PLAIN TRUTH. …