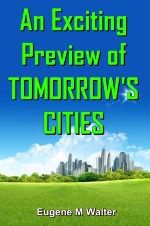 Tomorrow’s Cities will be like sparkling jewels on the landscape – filled with radiant beauty, with peace and prosperity, with happy, healthy people. Mankind will never have seen anything like it! Sound too good to be true? Sound impossible? It isn’t. Such cities ARE COMING – and that before the end of this century! But WHERE will they be built? And WHO will build them – and HOW? …