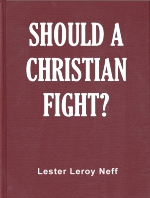 “Mankind must put an end to war – or war will put an end to mankind.” This shocking statement was made recently in an address to the United Nations assembly by President Kennedy. This entire world is fast plunging to destruction at the hand of man in world suicide or cosmocide. This present age is so perilous that President Kennedy continued, “Today, every inhabitant of this planet must contemplate the day when this planet may no longer be habitable.” …