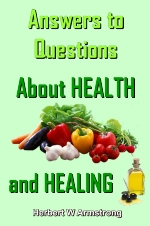 Never has the world known so much sickness and disease! New diseases unknown a generation ago afflict millions – WHY? How can you protect your HEALTH? What should you do when sick? Read, in this PERSONAL report, what so few understand! WE PRIDE OURSELVES on being the most advanced, enlightened, scientifically developed generation that ever lived. …