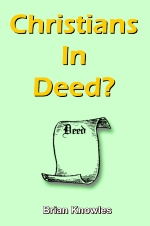 The world is full of nominal Christians – but how many are Christians in deed? The Christian Bible makes it clear that mere belief is not enough. United States Senator Mark Hatfield recently quoted a very moving, yet indicting poem, “Listen Christian!” (by Bob Rowland), which reads as follows: …