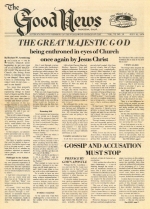 The book of Hebrews, chapter 11, is the story of faith in an entirely different light than most people conceive of it. Faith, as we normally perceive it, is the belief that what you ask God to do for you He will perform, if it’s in accordance with His will. Unfortunately that’s where many people limit faith. But faith involves much more. It involves an aspect that is far greater than merely receiving, an aspect that we call enduring. “Faith is the substance of things hoped for.” Once you have the substance and you’re no longer hoping for it, faith is not relevant to that matter. “Faith is… the evidence of things not seen.” It is the comprehension and understanding that there are ideas, there are beings, there are realities that we do not see with the human eye. We were not here when God created the world. Faith is that aspect whereby we recognize God as a creator. …