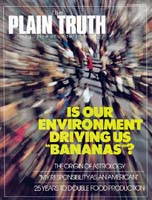 Personal from Herbert W Armstrong – Here I give you a glimpse into a private “Bible study” I had one day with our little traveling group. It happened to get into a very profound question that has puzzled scholars and theologians, as well as millions of people, for many centuries. Yet the answer is plain and simple, but of staggering importance to humanity. Today, I find myself back in the same hotel room in Rome where I had an invigorating “Bible study” with my little traveling group several weeks ago. We remember things by association. This room brought that particular study lesson back to mind. …