BLESSED IS THE NATION GOD IS FOR Page No: 26 – Dwight Armstrong – Ambassador College Chorale Accompaniment

BLESSED IS THE NATION GOD IS FOR
Page No: 26 – Dwight Armstrong – Ambassador College Chorale Accompaniment 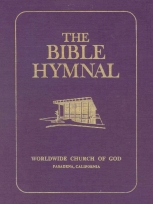 O you righteous in the Lord, rejoice; Songs of praise befit the upright;
Play skillfully upon the strings; Sing to Him a joyful new song.
For the Word of God is right and just. All His works are true and faithful;
His loving kindness fills the earth; For He loves righteousness and justice.

By the Word of God the heav’ns were made; Waters of the sea He gathered.
In storage places laid the deeps; Let all the earth revere Him.
Let the people stand in awe of Him; For He spoke and earth existed.
When He commanded it stood fast; By His word were the heav’ns created.

Kings will not be saved by armies great Nor a mighty man delivered;
Not one is saved by his own strength, Nor by some other power.
But the eyes of God are on the just; Those who fear and worship Him;
Who wait for Him, who hope for Him, Those who trust in the God Of Isr’el.

Herbert W. Armstrong (July 31, 1892 – January 16, 1986) founded the Worldwide Church of God in the late 1930s, as well as Ambassador College in 1946, and was an early pioneer of radio and tele-evangelism, originally taking to the airwaves in the 1930s from Eugene, Oregon. Mr. Armstrong preached an eclectic set of theological doctrines and teachings that came directly from the Bible. His teachings included the interpretation of biblical prophecy and taught observance of God’s Laws, Sabbath (Saturday), and the Biblical “Holy Days”.
View all posts by Herbert W Armstrong →
This entry was posted in Young Ambassadors - Ambassador College. Bookmark the permalink.