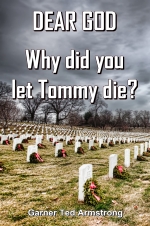 The letter was written by a young boy named Peter. He had been taught about God — told God would protect, preserve, heal. But his brother, Tommy, was dead. Why? Why does God allow tragedy? Why do innocent babies suffer? Why the caprice of tornado, hurricane or typhoon? Why, if there is a God, does God allow wars, and crime, and automobile accidents? …