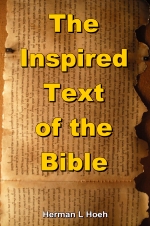 What are the fundamentals upon which a study of the Hebrew or Greek text must be based? The first and fundamental principle is very simple: God has told us in the Bible that He has indeed revealed His will to man by (1) inspiring men to write or say certain things; and (2) to have it preserved. In short, the concept is that all scripture is given by inspiration of God (II Tim. 3:16)! …