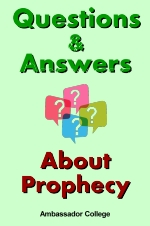 I have been reading your booklet called ‘The Book of Revelation Unveiled at Last,’ and I’m still left confused as to where we stand in Bible prophecy. What comes first? The disease epidemics, or the famines, or World War III? Maybe I just don’t get the full picture. What is next in line for the earth? Can you tell me? …