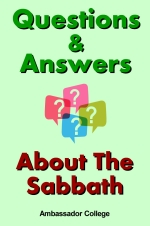 Question 1: The scriptures seem to indicate that the apostles observed ‘the first day of the week’ (namely the eve of Sunday) as the ‘Lord’s Day,’ the regular day of worship. I don’t have the historical background to know for sure if the above was a fact or not. Question 2: Isaiah 58:13-14 says that the Sabbath is supposed to be a delight, but then turns around and says not to seek your own pleasure. This seems like a contradiction to me. Question 3: Today’s English Version of the Bible says in Acts 20:7, ‘on Saturday evening we gathered together,’ which is directly contrary to what the Authorized Version says. So may I ask, did those disciples meet on the first day or the last day of the week? Will you please explain? Question 4: When does the Sabbath day begin and end? Question 5: I feel that your insistence on Sabbath keeping is an affront to the liberty of the gospel of Christ. I fail to see why Christians ‘have to’ keep the ritual law as given in the Pentateuch, but I agree that the moral law is unchangeable. As Christians, we must love God and our neighbors, for ‘love is the fulfilling of the law. …