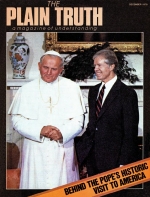 Events soon to occur in the Arab world will bring mankind to the very brink of annihilation! Here is the story – and the good news beyond. Who are the Arabs? Is the Arab world mentioned in Bible prophecy? Today the Arab world is an area of vital concern to nations around the globe. Both political and economic considerations place that vast region – stretching from the Atlantic to the Indian Ocean – at the very focal point of world attention. Could Bible prophecy overlook the Arabs? Assuredly not! …