FIRST OF A SERIES – You Can Have LIVING FAITH! – Herbert W Armstrong – Good News Magazine

FIRST OF A SERIES – You Can Have LIVING FAITH! – Herbert W Armstrong – Good News Magazine 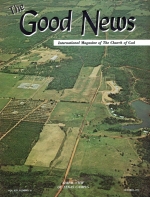 How can you know God is intervening to help you? What should you be looking for? How can you do your part? Here are answers to these questions of daily need and eternal import. THE OTHER day a young man came out to the college to see me. He had written two or three times asking me to pray for healing of an affliction caused by an accident, and each time I had prayed for him and sent him an anointed cloth, according to the example set by the Apostle Paul (Acts 19). …