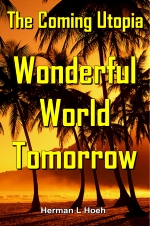 EVER SINCE the dawn of civilization, man has longed to live in a plush world where all his physical desires could be fulfilled! Your Creator has planned such a Utopia – and more important, He will soon establish that Utopia. Tomorrow’s World is just around the corner – universal peace and prosperity, a world bubbling over with joy and happiness! …