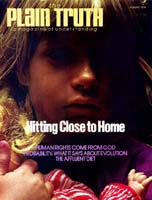 If that’s what religion is all about, it ain’t for me.” “I don’t feel a person has to go to church to live a Christian life. I’m not against church. It’s just that I don’t feel I have to go to church to be a Christian.” “No priest, no church is going to possess me.” “I think the churches have gotten like a lot of parts of society. They have to worry so much about paying the rent that they have forgotten the good news…I find some of the clergy are very wonderful people, but a lot of them have to seek out the almighty dollar so much…that [they] are robbing the people of the great heritage of the church…The leaders are afraid of theology.” “I feel religion is fine for some people, if you need it. Some people use it as a crutch.” “I didn’t see anything [in church] worth taking…Now it’s anything goes, just so you don’t hurt anybody. It doesn’t make any difference. God probably doesn’t exist anyhow.” …