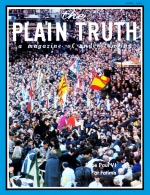 Why do so few today really STUDY the Bible? Is it an outdated book as critics claim? Read the surprising answer. Over 1900 years ago, the greatest newscaster the world has ever known predicted today’s present chaotic world conditions! He foresaw today’s scientific discoveries and technological advancements, and the crisis in the Middle East! And He foresaw the outcome! He knew that men would produce the destructive forces that now threaten COSMOCIDE – suicide of the human race! This famous newscaster warned today’s world leaders: “And except the Lord had shortened those days, NO FLESH should be saved [alive]” (Mark 13:20). This great news prophet was Jesus Christ! What He foretold has been in your Bible all these centuries. Believe it or not, no other book is as up-to-date as your Bible! …