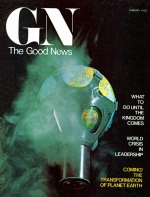 Never before in history have so many Christians combined their efforts in an organized manner to get Christ’s own gospel to a troubled world. Great progress has been made – but there is yet much more to accomplish. Millions have never yet heard so much as a whisper about God’s great master plan of salvation. Many don’t even know who Jesus Christ is! The vast majority of mankind has no idea that God may soon intervene in the affairs of men and bring about a Utopia of peace and universal harmony. That’s good news – and you can have a vital part in bringing it to this sick and dying world! SPEAKING of true Christians, Jesus said: “Ye are the light of the world. A city that is set on an hill cannot be hid. Neither do men Light a candle, and put it under a bushel, but on a candlestick; and it giveth light unto all that are in the house. Let your light so shine before men, that they may see your good works, and glorify your Father which is in heaven” (Matt. 5:14-16). …