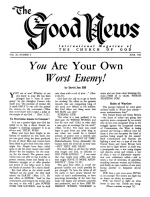 No conspiracy was more clever – or more successful. Here, retold at last, is the diabolical plot that erased from the minds of men the knowledge of the Plan of God as revealed in the Gospel of the Kingdom. ONE of the least-known facts of history is that a knowledge of the millennium – and of God’s 7000-year plan – prevailed over ALL the ancient world for HUNDREDS of years after the death of Christ and the Apostles. …