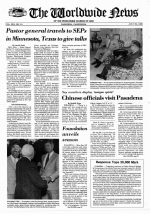 A wizened old sage was addressing a group of students gathered around him. In his feeble hands the old man held a bundle of sticks fastened together with a cord. “Now,” the frail old man said, “I want each of you to try to break these sticks in two.” He handed the bundle to one of the students, a tall, brawny fellow… …