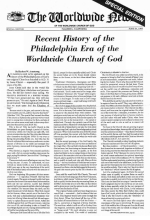 All members need to be updated on the history of the Philadelphia era of God’s one original Church as founded in A.D. 31 by Jesus Christ – especially the past 15 years of its life. Jesus Christ said that in the world His Church would have tribulations and persecutions. He did not foretell clear sailing. NO PEACEFUL EXISTENCE IN A HOSTILE WORLD. “If they have persecuted me, they will also persecute you,” He said. Again in God’s Word we are warned, “It is through much tribulation that we must enter into the Kingdom of God.” …