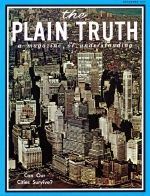 Most teen-agers and young adults want to marry. They want togetherness, security, a family – happiness! Yet, teen-age marriages are shattered by divorce at an unprecedented rate! WHY? Fully fifty percent of all teen-age marriages end in divorce within five years! The younger a person marries, the greater his or her chances of marital failure. And to compound the problems, about half of all American brides are teen-agers! WHY this ugly social problem? It’s about time parents and teen-agers understood. …