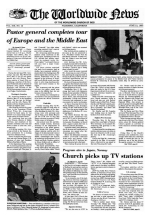 Every month, the work’s Editorial Services Department receives hundreds of letters from readers responding to the Church’s publications. The majority are positive and complimentary; they come from people who are thrilled with the truths they are discovering and who want to express their appreciation to Pastor General Herbert W. Armstrong and our writers. We also get complaints from readers who disagree with us, but not many… …