Can You Go to Your Brother? – George M Kackos – Good News Magazine

Can You Go to Your Brother? – George M Kackos – Good News Magazine 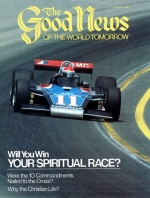 Your relationship with another person can be ruined by an offense. Here IS God’s way of dealing with offenses. It’s going to happen sooner or later – probably sooner than later! It’s inevitable when people get together – husbands and wives, bosses and employees, business associates, friends who have known each other for years, people who have just met. Someone is going to be offended – get his feelings hurt because of w hat someone else does or says, misunderstand a message, misinterpret a situation. And, sad to say, offenses can destroy loving relationships and create long-lasting enmity and hard feelings. Even seemingly insignificant misunderstandings can, unless handled properly, fester into deep wounds that permanently divide people. …