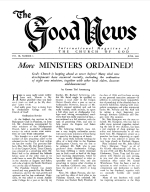 Here is the surprising answer to this much misunderstood problem! THIS subject is vital! Some brethren assume because they are not overcoming, they have not been called. Unless we can know – unless all doubts are removed – we have no assurance of withstanding the trials certain to come in this generation. A Divine Call. All really converted Christians receive a Divine call! This is one of the plainest truths of the Bible, yet millions assume it is a matter of their own “choice.” Notice what Jesus told His disciples: “Because IT IS GIVEN unto you to know the mysteries of the kingdom of heaven, but to them [the vast majority] IT IS NOT given… Therefore speak I to them in parables [to obscure the truth) …lest at any time they should see with their eyes, and hear with their ears, and should understand with their heart, and should be converted…” (Mat. 13:11-15). Jesus here revealed that only a tiny minority [a small number of disciples] were being given real Bible understanding. Jesus said it simply is not God’s intention to convert everyone at this time! …