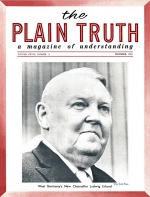 The true God is beginning NOW to intervene in human affairs! Events are swiftly building to a CLIMAX. Read here the absolute NEED of DIVINE INTERVENTION in world events! Don’t kid yourself! God is soon going to intervene in human affairs and change this whole world! Whether or not you are “religious” has NOTHING to do with it! Whether or not you “look at” it that way has EVEN LESS to do with it. It is GOING TO HAPPEN! You might as well wake up and FACE FACTS! The world you live in won’t be here 15 years from now! …