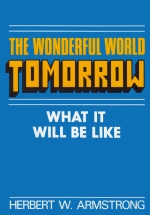 Three World Views – Only One is Going to Happen! YOU DON’T HAVE TO BELIEVE IT! It will happen, regardless. It is sure – the world’s only sure hope. This advance good news of tomorrow is as certain as the rising of tomorrow’s sun. Humanity won’t bring it about – it is going to be done to us. Humanity is going to be forced to be happy – to enjoy world peace – to see universal abundance and joy fill the earth. …